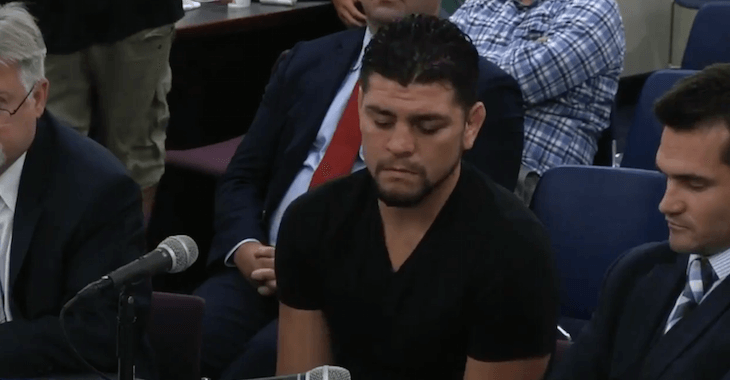 On Monday, UFC fighter Nick Diaz appeared before the Nevada State Athletic Commission. He left that hearing suspended for five years and fined $165,000, stemming from his failed drug test at UFC 183. That failed drug test was for marijuana. Anderson Silva, his opponent that night, also failed his tests, except his tested positive for steroids. He was suspended for one year.

At the hearing, Diaz’s legal team provided information, attempting to show that the three tests showed very inconsistent results, results that really made no sense. The commission however, weren’t really all that concerned with that. When they deliberated, a lot of their focus was on Diaz’s past offenses and because he choose to enact the fifth amendment during the hearing, they felt a lack of respect. The decision is controversial to say the least. As soon as it was handed fighters and fans went off on social media condemning the commission for dealing out such a harsh penalty.

The clip below shows the commission badgering Diaz with questions, even though it’s clear he’s choosing to use his rights and enact the fight amendment. At one point one of his lawyers even tries to put a stop to it because he says they’re just trying to make a spectacle out of it.