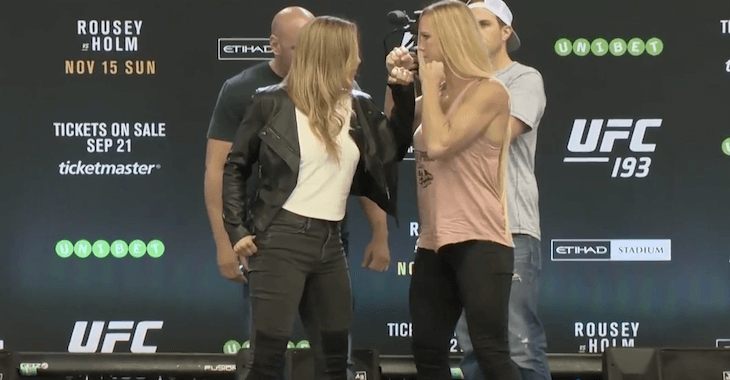 The UFC showed up in Melbourne, Australia with their two female champs, Ronda Rousey and Joanna Jedrzejczyk, along with their upcoming opponents Holly Holm and Valérie Létourneau.

The four fighters, along with UFC president Dana White, took part in a press conference. After that, the fighters met on stage and faced-off with each other.

Rousey and Holm met in the center and got all up in each other’s grills.

By now we’re all used to Rousey’s staredown, she has a certain form, where she walks up fast and gets in her trademark pose, with only her left arm up. They kept each other’s gaze the whole time and even when they broke away, it looked like Holm kept her eyes on Rousey.

UFC 193 is being built as one of the biggest cards ever and the promotion is hoping to break the all time attendance record in Melbourne. Think they can do it?

‘The stars of UFC 193 staredown their opponents including Ronda Rousey vs Holly Holm & Joanna Jedrzejczyk vs Valérie Létourneau.’