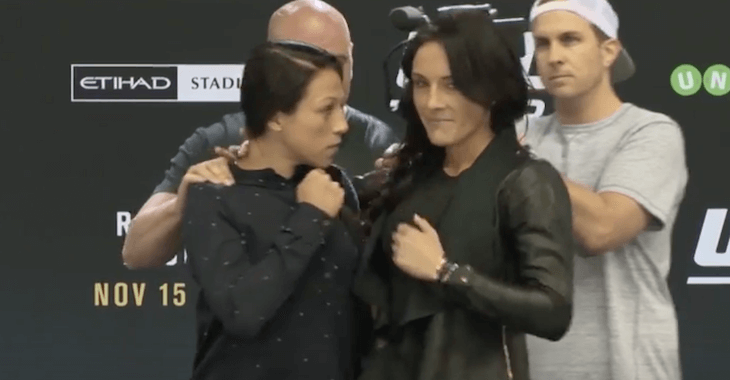 The UFC held a press conference in Melbourne, Australia yesterday to promote the pre-sale of UFC 193: Rousey vs. Holm.

The bantamweight champ and her challenger were in attendance, as well as the co-main event fighters, UFC strawweight champion Joanna Jedrzejczyk and challenger Valérie Létourneau.

They held a press conference and took questions from the media. Then it was time for staredowns.

Joanna ‘Champion’ has become known for her intimidating staredowns, where she hunches down and gets as close to her opponents face as she can. It’s scary.

Well, things weren’t any different this time around and when it was time to face-off, the champ went from pleasant to intense in a spit second. They touched faces and when Létourneau looked away, Joanna kept her gave on the challenger like a wild women.

Do you think Joanna is going to run through Létourneau like she did her last two opponents?

Check out the staredowns!