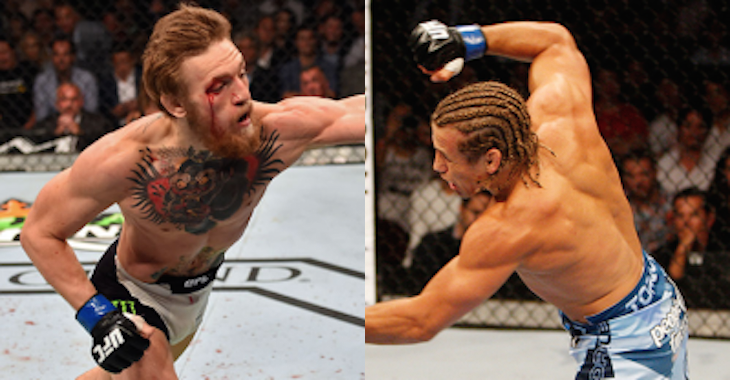 UFC interim featherweight champion Conor McGregor and Team Alpha Male’s Urijah Faber will not fight at the end of the upcoming season of The Ultimate Fighter, where they coach opposite of each other.

Instead, McGregor will fight Jose Aldo the day after the Finale at UFC 194 and Faber is still without a fight.

But, that doesn’t mean there’s no chance of the two meeting up in the future. On Tuesday’s episode of Stud Show Radio, Faber talked about his desire to compete against the Irishmen and broke down why he thinks it’s a bad match up for ‘Notorious’.

“I, on the other hand, would like to get my hands on him.”

“I think the only real advantage he has –- first off, he’s a good striker, primarily with his hands, he’s like best at boxing. He’s really flexible, witch is a good attribute for him as well, and he’s really big. Those are like his three things, right? But, his only real advantage in my opinion is that he’s just a really big guy for the weight class, like he’s bigger than I am. But he’s terrible on the ground and I’ve got the most submissions in WEC/Strikeforce/UFC history.”

“His biggest attribute going against me is that he’s a much bigger guy than I am, and that’s it.”

Watch the full clip below: