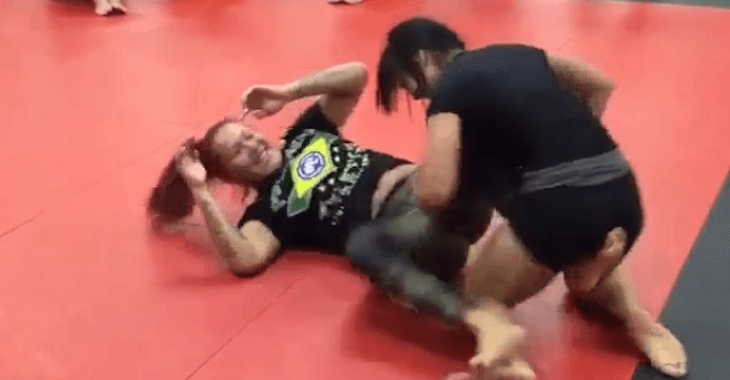 Cristiane “Cyborg” Justino has started her path down to bantamweight and Ronda Rousey! It was recently announced that “Cyborg” would be dropping down to 140 in November for a future Invicta FC card. While her opponent and the date of her fight has yet to be announced, it should be a good warm up fight for “Cyborg’s” debut in the octagon.

Fans and fighters alike have been clamoring for “Cyborg” to eventually make her way to the octagon. “UFC 190” saw Rousey easily defeat Correia in less than a minute and fans expected the Brazilian to challenge Rousey shortly thereafter. Instead, it will be Holly Holm who gets the next crack at defeating the queen of the bantamweight division.

When she isn’t dropping weight and training for her upcoming fight, “Cyborg” is in the gym having some fun! Check her guard game out in the following video— this chick can’t pass it!

Do you think Cyborg’s ground game is good enough to stop an armbar attempt from Rousey? Who would you have winning that fight if the two were to ever square off? Share your thoughts and make your predictions in the comment section below!