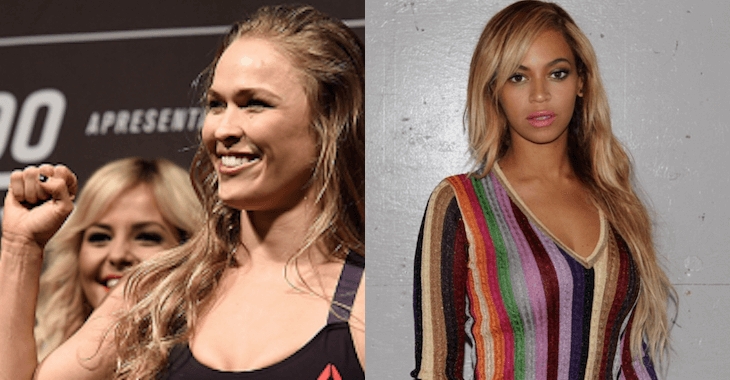 Well here’s something you don’t see everyday, a global superstar using an MMA fighter’s words to inspire the crowd.

Look, she might not be your cup of tea, but Beyonce is one of the biggest stars on the planet. That’s not an opinion, that’s a fact. So, when she recently performed at the ‘Made in America’ festival and used UFC champion Ronda Rousey’s audio clip, where she’s explaining a ‘Do nothing b*tch’, people were pretty surprised.

The clip came from an episode of UFC 190 Embedded, where Rousey’s discussing the issue of body image and people saying she looks too masculine.

The phrase has since caught fire, with t-shirs and what not being sold to support charities. Rousey is apparently even trying to trademark the phrase.

Check out this clip, from Dana White’s Twitter showing Beyonce use Rousey’s audio before a song.

Ronda Rousey DNB at Beyonce Made In America Festival