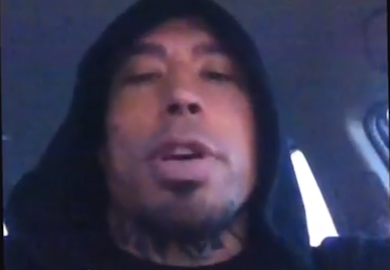 The story title really has two different subject matters in it.

For that I apologize, I just didn’t see the need to make two stories about War Machine today.

In an odd move, one of Bellator’s, more recognizable welterweight’s, War Machine, has been posting troubling, some would even say, nonsensical babbling, video’s to his Youtube channel covering everything from the lady at 7-11 to the old guy at the gym. All of who he wishes physical harm upon.

Now that the video shame is out-of-the-way, here’s a tweet chain from War Machine about his sudden and unfortunate removal from Bellator’s welterweight tournament.Bummer!

I have fought my last 3 fights with a torn ACL, a hernia and a torn rotator cuff but this disc injury is too much, can't feel right foot.

Herniated disc has caused me numbness in right glute/hammy/foot and I can't even flex my calf. Nothing I can do but bow out. I'll be back.

Is this guy all there, or are there some screws loose? Let me know your thoughts!