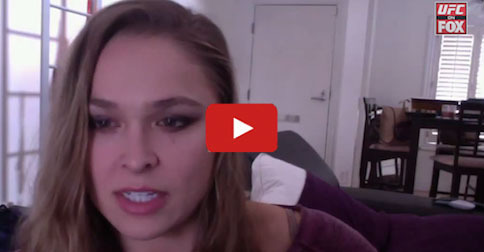 “Cat Zingano is an extremely unique fighter, not only is she undefeated, but she’s shown an amazing ability to deal with a lot of adversity. There’s been a lot of times in her fights where she’s been down but she’s never been out. There’s been times when she’s close to losing, but there’s never been a time when she didn’t come back. That makes her an extremely dangerous opponent. I have to entirely put her away to the very end. She’s the most risky opponent I’ve ever had.”

Rousey on who she’s watching in the division: “I’m keeping an eye on Bethe Correia. She’s undefeated right now. And Holly Holm, I’m looking forward to her debut. I wouldn’t be surprised to see Jessica Eye do well this year too. So all three – I’m very interested to see how year plays out for them.”

Rousey on the strawweight division: “It’s good and it’s been around a while with Invicta building it up. But it’s little bit younger than the bantamweight division. It’s a little striker heavy, so the grapplers have the advantage at the moment and it doesn’t surprise me that Carla is the champ because she has the style advantage over everyone at the top of the division.”