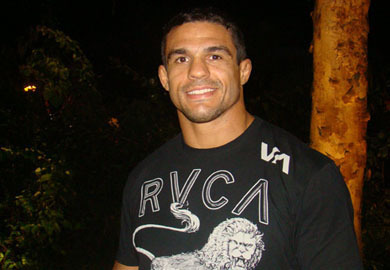 Vitor “The Phenom” Belfort (23-10 MMA, 12-6 UFC) is nothing less than a legend in the sport of mixed martial arts. He has provided fight fans with some of the most memorable knockouts in MMA’s history. But, with all that said, Vitor has been under a lot of public scrutiny lately in regards to his use of TRT (Testosterone replacement therapy.)

“The Phenom” recently opened up to MMAJunkie’s John Morgan about his use of testosterone replacement therapy (TRT):

“The TRT is my private life, but it’s become public, and it’s now a big, big thing,” said Belfort. “I believe that all the good things I’m doing, people kind of forget it and have a tendency to not pay attention or give credit for the way I’m winning fights, the way I’m working, the way I’m being an example for my Blackzilian teammates. I’m putting in the hard work, and I’m not done yet.”

“So basically what TRT is for me is to not be at a disadvantage. People talk like it’s a cheating process, but it’s the opposite. Low testosterone is something that can cause serious health problems and even death. You can have problems, big problems, if it’s untreated. So the treatment is for you to live longer and have a better life by having less health problems.”

“People think TRT is about increased sex drive or performance-enhancement. It’s not that. It’s about life… It’s just for me to have better health, a better life.”

“For the fight with Rockhold, I did seven blood tests. I did one every week. I have records of all of them. Some of the results are even lower than they should be, and the doctor said, ‘You should probably increase,’ and I said, ‘No, I don’t want to get to a level that’s bad for me.'”

“I just want people to know that I have a conscience, and I wanted to have something, a record, that for the rest of my life people can know I was doing something right. I don’t ever want to cheat.”

“We live in a world where some people can’t accept men with integrity succeeding. Just so people understand, taking testosterone doesn’t give you an edge for any reason. If you take too much, it’s actually going to mess up your system bad and cause the absolute opposite effects. People have a tendency to interpret things wrong. I understand that it’s cheating when you do something that’s not legal, but this isn’t illegal.”

“I believe the credit of my performance belongs to my work ethic. It’s my will. It’s the coaches that invest their time in me. It’s my team. They sacrifice everything along with me. So it’s a journey. It’s the UFC. I encourage reporters to study my life, study my work ethic and what I’ve been doing a long time. Now I’m just maintaining that.”

It is commonly assumed that Belfort needs TRT because of previous use of Performance Enhancing Drugs. Belfort was suspended by the Nevada State Athletic Commission in 2006, after testing positive for anabolic steroids.

Belfort however says his need for TRT remains uncertain:

“Everybody is different. It’s hard to tell, and I’m definitely not a doctor. Some things you’re not sure exactly why they’re the way they are, but you have to address it.”

“I had something bad happen, but I have a God that turns bad into good. I am a perfect example of that – the way I was raised, the way things happened. So that’s Vitor Belfort turning bad things into good.”