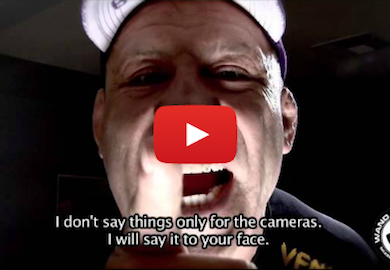 Wanderlei Silva has an intense and clear message for Chael Sonnen!

“I’m only waiting for the date and the location. Because the people want this fight and I want this fight. Sonnen, I will beat you up, you coward… why do I have so many fans? Why does everybody want to watch me fight? Why are you my fan? It’s because I fight with all my heart.

“I don’t go int here to give up. Like Sonnen did against Jones in the very first round. Like he did against Anderson, when a knee to the chest and stayed down like a little girl.
“Sonnen is a lower level fighter. Don’t listen to what that fool says. Now you’ve messed with the wrong guy, and I will beat you up.

“I’ve already shut you up, face to face, and you were not man enough to step to me. Sonnen, you are afraid of me, and I can see it in your eyes every time we meet. And now I will get you Sonnen. Now I will get you.

“You won against Shogun by luck, because Shogun was going to beat you up. You were lucky to have caught him in that guillotine. But with me, you will get punched in the face. I will go into this fight not only to fight, but to hurt you. I won’t do it fast either. I want a five round main event. I don’t want just a co-main event, I want a full 30-minutes to punch your face.