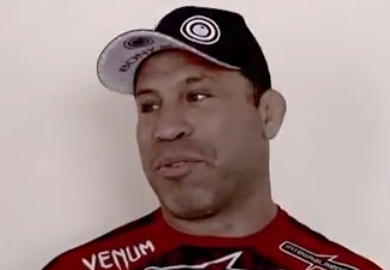 I was at home yesterday, I had just got back from a trip. I was someone’s joke on Twitter, since it was April Fools’ Day, so then I realized that it was April Fools’ Day. Then I started thinking about it. Nobody knew what would happen with the Mousasi fight, and a lot of people were saying that I should fight. So I wrote my first tweet. I counted to 7 and my phone started ringing. It was the reporter for Globo.com, these guys are fast. Now that’s what it means to be efficient. I was at home and they were calling me for the news.

How is it that everyone is tricked on April Fools’!? Some people got mad, but take it easy, everyone gets tricked some day. The good thing is that people got disappointed Wand won’t be fighting this Saturday.

I want to wish Mousasi good luck. And I am sorry. but if you don’t want to accept my apology, I am here and I also fight in the 205 division.

Good luck, I hope both of you have a great fight. I will be at home watching it. I think all of this was good marketing for the event. Everyone got views from it, some people think it’s funny, some people get mad. Jokes happen my friends. Happy April Fools Day.