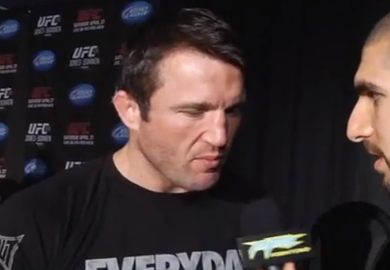 “I think somebody probably told him he should take it back. My side would have got to him; we would have sued him. We would have just said, “Prove it. That’s a pretty good accusation. Where’s your evidence?”

Yeah (I still think he’s a good guy). He took it back. I haven’t accepted his apology, but I acknowledge he did give an apology. I don’t know why he would say that. I was very disappointed. That was a a very reckless statement.I don’t wish to engage or out him for something. It wasn’t true and I resent it.”

Chael Sonnen talks about his UFC 159 fight against Jon Jones, his change in attitude towards Jones, his thoughts on Jones calling him a cheater, whether he will fight past UFC 159 regardless of what happens, his weight cut, and more.