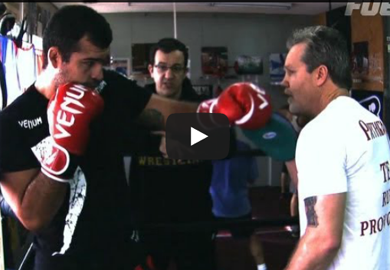 “This all happened because my manager contacted Freddie Roach and his team and scheduled some training sessions. It’s been really good for me because I’ve learned some details to improve my fighting.”

“When we started, he really didn’t know how to pivot and put his full weight behind the punches and so forth, but we’ve been working on that. He’s a great puncher, a great striker and in a short time he’s come a long way. When he first got here, his mechanics were a little off. When I tell him something, he understands what I mean. It doesn’t take long for him to pick it up. Guys with talent pick stuff like that up quickly. It’s been a lot of fun.”

“He really saw an improvement in my punches because of the coaching he gave me. So now, I punch like Superman!”