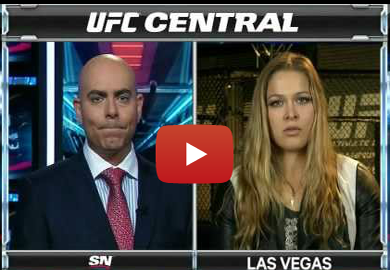 “I mean, she’s obviously not willing to go through the effort to go for the fight,” UFC women’s bantamweight champion Ronda Rousey told ‘Showdown’ Joe Ferraro. “If you’re pumped full of steroids and the lightest you can get it 145 it’s obvious the lightest you can get without steroids is lighter. She refuses to do that and it’s just – I don’t know where this sense of entitlement comes from. She hasn’t had a recorded win in over three years; I mean there’s so many other women.

“I’m not – we’re not going to make exceptions and create divisions for someone who was a fraud and defamed the sport.”

“She almost destroyed women’s MMA. I mean think about it, the entire sport stagnated under her and she cared more about having an unfair advantage and winning fights then she did about the sport itself and it suffered under her.

“We don’t owe her anything. If she wants the only title that matters she needs to go in the only division that the UFC has. We’re not making exceptions for cheaters. She was exposed as a fraud and she needs to be the one to make the changes to clear her name.”

“Encouraging something like (a catchweight bout) is not something I’m willing to do. If we meet at a catchweight of 140 or something like that, she’s routinely come in to fights grossly overweight like seven pounds or more overweight. I wouldn’t put it past her to come into a fight, agree to 140 and come in at 148 and be like, ‘Whatever, fight me anyways.’ Because she’s done it before and I’m not going to encourage behavior like that and I’m not going to give someone like that a chance for the title ahead of the girls who really work hard and are honest and deserving of it.

“If you want to prove to everybody that you deserve to be called the best in the world, well then come in to the only division and fight for the only title that matters.”