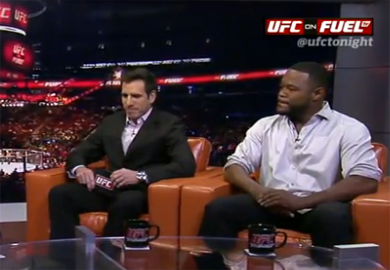 “For the most part, I commend the UFC for making the fights happen that the people love to see. But as a fighter, I was like, ‘man, what’s it gonna take for me to get a chance to get back up in there?’ I wanted to fight Anderson, but it didn’t end up happening because they said I needed one more fight to be a contender at middleweight. But I guess it’s not the same for everybody.”

“I was hoping in December, by the end of the year, but it looks like it’s not going to happen. Maybe in February or March. But who am I going to fight, that’s the big question. I can’t go down in weight class after a loss to Jones unless it’s a special event, unless it’s something that really beckons for my calling, and then I’ll do it.”

That’s a big opportunity to fight Anderson. Anderson’s one of those guys whom I consider one of my favorite fighters to watch. To have an opportunity to fight him would be a dream come true for me. The guy who i really want to fight more than anything is a guy I lost to, my first loss, and it’s Machida. I would love to get a chance to fight Machida again. He looked good against Bader and I want to get that one back. I want to get it back bad. That’s the one I really want the most.”