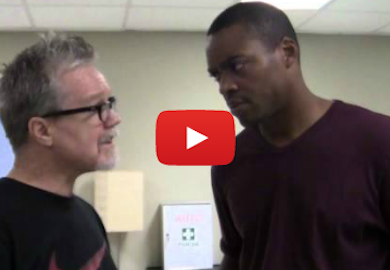 Pacquiao trainer Freddie Roach asked Rios trainer Robert Garcia to end Rios’ workout at 11 a.m. Macau time. Rios was scheduled to work out from 9 a.m. to 11 a.m., but started late because he had done interviews. Garcia asked for a few minutes. Pacquiao was slated to work out from 11 a.m. to 1 p.m.

Roach called Garcia “a piece of [expletive],” which prompted the escalation of the incident. Rios conditioning coach Alex Ariza, who was fired by Roach as Pacquiao’s strength and conditioning coach, told Roach to “get the [expletive] out of the gym.” Roach responded by saying, “Make me get out.”

Ariza mocked Roach’s Parkinson’s disease several times. At one point, Ariza took a step forward and kicked Roach in the chest. As chaos broke out, Ariza said to Roach, “You’re a [expletive] joke,” and then used a gay slur.