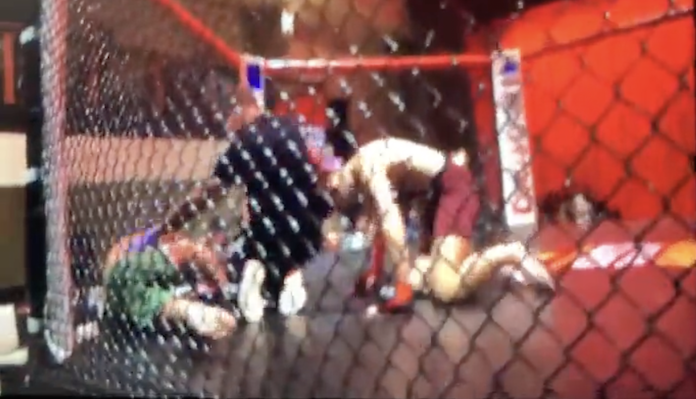 An MMA fighter earned a head kick KO but broke his leg in the process during a crazy knockout that took place on the U.S. regional scene.

Amateur MMA fighter Dylan Kiskila fought Kai Duque in an amateur featherweight bout that took place at CFC (Captains Fight  Club) 1 this past Friday night at the Avalon Events Center in Fargo, North Dakota, United States. The fight ended up churning out an absolutely insane knockout as Kiskila landed a brutal head kick that knocked his opponent out. The only problem was that Kiskila also broke his leg in the process. Watch it below.

This is definitely a pretty crazy knockout and not something that you see every day in MMA. Obviously, we see head kick knockouts all the time. But how often do we see someone break their leg on a head kick that lands? And how often do we see a broken leg actually knockout someone? Not very rare, so this is definitely one of the crazier knockouts we have seen as of late. The regional MMA scene in the U.S. is a treasure trove for these sorts of knockouts, as there are fights going on every weekend all over the country.

As for this MMA fighter who broke his leg, one would imagine that he would be out of action for quite some time after breaking his limb. This fighter was an amateur so it’s possible that they will turn pro someone next year when they return to fighting. After landing a brutal knockout and then breaking his leg in the process, this amateur fighter is likely hoping that they will at least get paid for stepping in there and fighting going forward, as amateur fighters are not paid the same way that professionals are.

What do you think of this crazy MMA knockout?