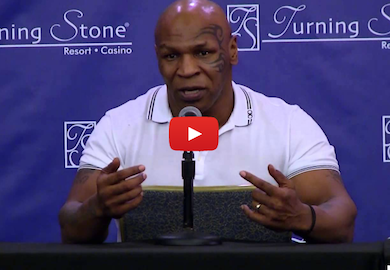 “I’m a bad guy sometimes. I did a lot of bad things, and I want to be forgiven. So in order for me to be forgiven, I hope they can forgive me. I wanna change my life, I wanna live a different life now. I wanna live my sober life. I don’t wanna die. I’m on the verge of dying, because I’m a vicious alcoholic. Wow. God, this is some interesting stuff.

“I haven’t drank or took drugs in six days, and for me that’s a miracle. I’ve been lying to everybody else that think I was sober, but I’m not. This is my sixth day. I’m never gonna use again.”

A choked up Mike Tyson gave full disclosure to the media in attendance at his Friday Night Fights press-conference that also served as his debut as a fight promoter.