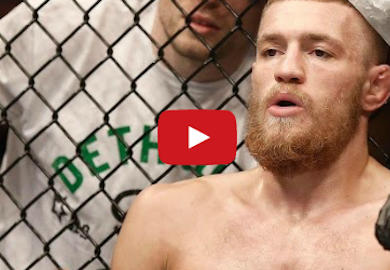 Conor McGregor joins UFC Tonight to talk about his upcoming bout with Cole Miller, his friendly banter with Cub Swanson and more.

Conor McGregor on his knee injury: “What knee? The knee is a distant memory. I’m done talking about it. I’ve got the all clear. Someone is going to pay. First in line is Cole Miller on July 19 in my hometown of Dublin.”

McGregor if he’s ready to fight again after the layoff: “I stay ready. That man opened his mouth. He was under the influence of post-fight adrenaline and it has the same effect as alcohol. It makes you brave. But guess what happened? It wore off. Now he has to face the reality that he’s going to face me – me coming back from this injury is a man possessed. I’m going to go in there and break him in the very first exchange.”

McGregor on if Miller has a reach advantage: “He’s slow. He’s scared. I’m fast. I’m fearless. There’s no contest. I see it in his voice, his body language. He’s petrified. I’m coming to get him. And not just him – forget him – I’ve listened to everyone calling me out. Now I’m back and I’m going to rip through them. I’ll smash Chad Mendes, I’ll annihilate Jose Aldo. I’m coming to take over the division. It’s my division.”

McGregor on if he feels pressure headlining the upcoming fight in Ireland: “I don’t feel any pressure whatsoever. A man who wears a suit like this doesn’t feel pressure. Moving around is difficult. In and out of the gym, I have to dodge panty hose, every time I enter and leave. So I’m moving to Iceland to prepare with my teammate who’s the co-main event. It’s a beautiful place, it’s peaceful and the people are nice. It’s isolated and we’ll focus on the contest. I’m coming back July 19 and I’m going to whip Cole Miller.”

McGregor on calling Cub Swanson an old man: “That is true. I didn’t ignore him. I didn’t see him. Then I said ah, old man Swanson. I have no problem with you, but when the time comes I’m going to break you, old man. There was some back and forth. I said I’m just having fun, but keep the old timer away from me.”