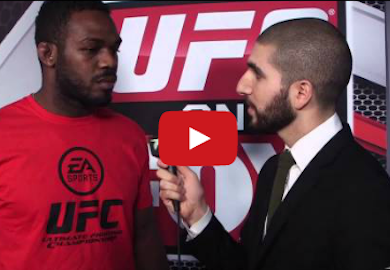 Jon Jones discusses sharing the EA Sports UFC cover with Alexander Gustafsson, Georges St-Pierre’s decision to vacate his belt, his upcoming fight against Glover Teixeira at UFC 172 in Baltimore, why his fight keeps getting delayed, the Russian video with Frank Mir, and much more.

“I am not surprised by it. I understand what Georges is going through, it’s a lot of work and I’m actually happy for him. I don’t think he’s got any more to prove. He’s been through that division several times and he went out like a champion — on top and on his terms with a good head on his shoulders. I think there’s so many opportunities out there for him and I’m happy for him. I think he’s a great example.”