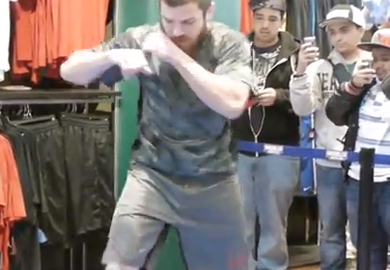 From Youtube:
Jim Miller and his brother Dan Miller were at Modell’s in midtown Manhattan on April 21, 2013, doing a workout for the press and MMA fans, leading into his fight against Pat Healy at UFC 159 in New Jersey this weekend. Jim warmed up with Dan with calisthenics and pummeling and wrestling, then hit the pads to show off his strikes, ending with an MMA match against his brother.