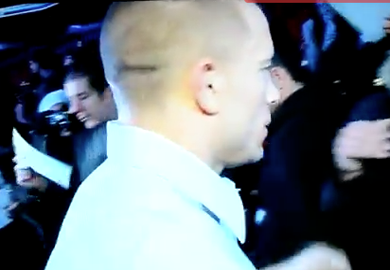 While promoting his showdown with nemesis Nick Diaz, Georges St-Pierre took to some fan questions during the recent ticket release press conference.

One Canadian fan went for shock and awe when he asked the UFC Welterweight champion if he would place it safe in the fight or actually go for the finish.

To that GSP responded with…

“These are the kind of people that have a big mouth but probably can’t even fight. They don’t know anything, they eat popcorn, with a Coca-Cola and a chocolate bar, they like to complain, but they don’t know how hard it is to KO someone in the Octagon. It’s easy to say ‘I will knock someone you,’ but in fact, it is very hard to do.”