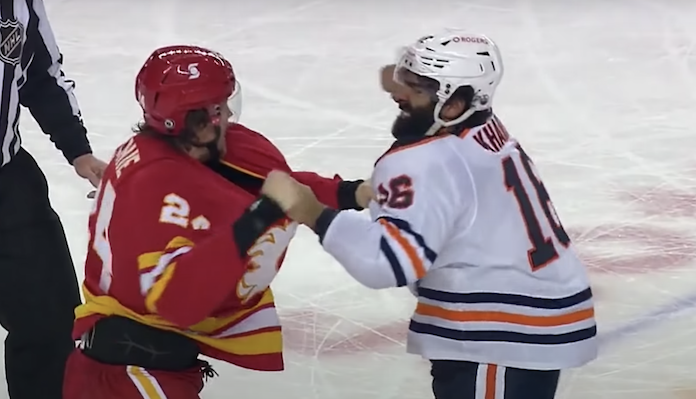 Edmonton Oilers forward Jujhar Khaira suffered a brutal knockout during an in-game hockey fight this week in the NHL against Brett Ritchie.

During Monday’s hockey game between the Oilers and the Calgary Flames, Khaira landed a cheap shot on the Flames’ Oliver Kylington, nailing him right in the head with his shoulder. The referees did not call a penalty on the play and so the players decided to take the matters into their own hands. The Flames’ Ritchie then challenged Khaira to a fight, which he accepted. You can see the original hit to the head that first caused the issues between the players and then the brutal fight between Ritchie and Khaira in the videos below.

and because the referee can't call a fucking penalty, there's a good chance he's concussed now too. pic.twitter.com/tQC1ZBSrpg

As you can see in the video, Khaira took some big blows in this fight and his eyes look completely glazed over once the KO punch hits and he falls to the ground. Fortunately for Khaira, it looks like he has escaped any sort of long-term damage following this KO. According to Oilers’ head coach Dave Tippett, Khaira likely escaped with any sort of serious injuries in the fight, and the club is now considering the forward “day-to-day” following the KO loss. The Oilers and Flames rematch on Wednesday night, so keep your eye out.

Khaira is a Canadian-born hockey player who hails from British Columbia. The 26-year-old Khaira was drafted in the third round by the Edmonton Oilers in 2012 and he made his NHL debut in 2015. He has been a member of the Oilers’ roster since then, currently in his sixth year as a pro. Khaira has skated in 240 NHL games, scoring 24 goals, picking up 36 assists, and racking up 181 penalty minutes. According to HockeyFights.com, he has been in 10 fights during his career, including four in the 2020 to 2021 season alone.

What are some of your favorite hockey fights of all time?