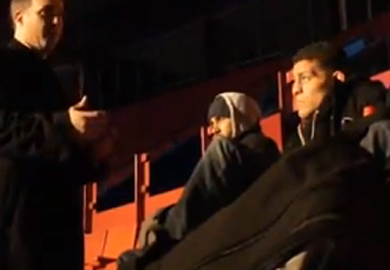 In this video we see the UFC’s Senior VP of Business and Legal Affairs and Assistant general Counsel, Michael Mersh, discuss with the Diaz camp a last-minute changing of the weigh-in rules, which he confirms is only applicable for the GSP vs. Diaz fight and no other fighters on the card.

While some of the clip is hard to hear, it is clear that this man conveys to Diaz that the commission has allotted a 0.9lb weigh-in allowance for both fighters. Something that is not common for a title fight. Additionally, he says that the two fighters have an additional hour to make their contracted weight of 170 pounds.

The convention of Mixed Martial Arts allows for a one-pound allowance for all fights, except when a belt is on the line. Champions and challengers are always required to make the exact limit the belt is being contested for.

So why the special treatment by the Canadian governing body for the GSP vs Diaz fight?

Here is some of the dialogue from the video:

“Here, they’re going to allow you and Georges to have an extra hour,” Mersch says. “Just in case somebody doesn’t make it.”

A member of the Diaz camp responds, asking “why didn’t we know that before?”

“Should be fine, hopefully, other than that. Just so you guys are in the loop, if there’s …”

Again, a member of the Diaz camps responds, asking “why didn’t you tell us that yesterday?”

“Well, no,” he says. “It’s just something to keep in mind. That’s kind of an off the record type of thing. But keep that in mind. As long as he’s under 171, we should be good.

“But, there is a time period afterwards, for you and Georges only. All the other fighters have to make it the first time. Just letting you guys be in the loop, okay?”

A member of the Diaz camp quips, “that’s a loophole… A Canadian loophole.”