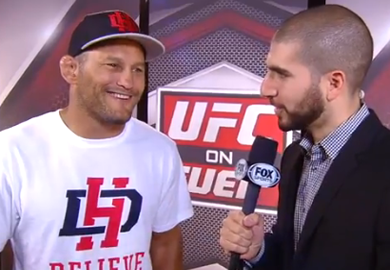 Dan Henderson talked with UFC Tonight’s Ariel Helwani after the weigh in for UFC 161 and he has one thing on his mind. Finishing Rashad Evans in dramatic fashion. Will Hendo get the job done?

Ariel Helwani: Dan, some people have suggest that Rashad Evans has lost a step, do you agree?

Dan Henderson:No, I’m expecting to fight the best Rashad Evans that there ever was, and that’s what I hope for. I hope that he’s at his best and that’s just going to make for a more exciting fight.

Ariel Helwani: His last performance obviously wasn’t a good one, what do you take away from that?

Dan Henderson: Not a whole lot. I mean everybody has a bad fight or is flat, has a bad performance. I’ve been there too and I can’t be judged on that last one and I’m not going to judge him on how that last one was.

Ariel Helwani: Much like you lately he has become more of a striker, but recently has been working with Kenny Monday. They’ve hired him over at the Blackzillians. Does that he mean he’s going to try to wrestle you more tomorrow?

Dan Henderson: No I think he’s still not going to forget about his stand up, but I was already expecting for him to try to take me down at some point in the fight

Ariel Helwani: Do you hear the chatter, some people saying maybe it’s time for Dan to walk away? Do you hear that and does that bother you?

Dan Henderson: I hear it, but it doesn’t bother me at all. It’s entertaining for me. It creates a bigger challenge I guess

Ariel Helwani: How do you see this fight playing out?

Dan Henderson: I think it’s going to be a war and I plan on stopping him.