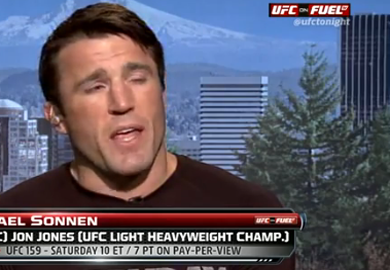 Why don’t you shut up and listen up and I’m going to tell you what’s going to happen in this next week. When I get to the Soprano’s state, when I step off that plane in New Jersey, there’s a new family in town, the Sonnen family, and I’m the new Don.

I’m taking over that state and the first thing I’m going to do is go to the speaks, the sitdowns, the social clubs and handing out smacks to anyone that doesn’t want to kiss the ring.

And my first order of business is to beat the bejesus out of Jon Jones and when I’m done I’m gonna go over to Johnny C’s place on Union Street in Brooklyn, have a couple of faschettas and give the guys of the other five families an opportunity to pay me tribute.

Jones, you will be reminded the hard way, why you never piss off, a ganster.

Chael Sonnen made a surprise visit to UFC Tonight for the sole purpose of delivering a final message to Jon Jones. Sonnen will have a chance to back up his tough talk when he takes on Jon Jones for the UFC Light Heavyweight Title at UFC 159 on April 27th at 10/7P ET/PT.