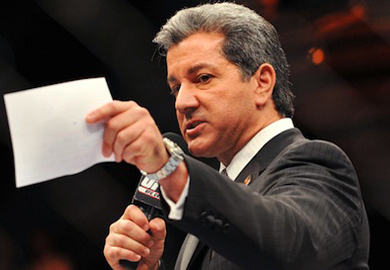 “With all respect to Frank because he’s an awesome fighter, he’s been one of the top welterweights in MMA, Frank and I basically were friends, we are friends, and we went into an elevator in the Hard Rock Hotel on the tenth floor and Dana White happened to be in the elevator. As soon as we’re walking in, Frank’s asking Dana to put him back in the Octagon, which is fine. But I’m a watch freak, and Dana had on this great wristband on his watch, and I stepped in front of Frank to look at the watch, and suddenly I get a ridge-hand in my throat. That’s a fine how do you do from Frank, we just had a drink together! Did I not drink right? I looked at Frank, and I said, ‘You hit me! Why the F did you hit me?’ And he said the wrong thing to me. He said, ‘What are you going to do about it?’ And I just reacted since my old street kicked in. I punched him twice in the stomach, basically with the same power with the old rules of sparring, 60 percent equals 60 percent. But it picked up. We had a lot of fun for 10 floors.”