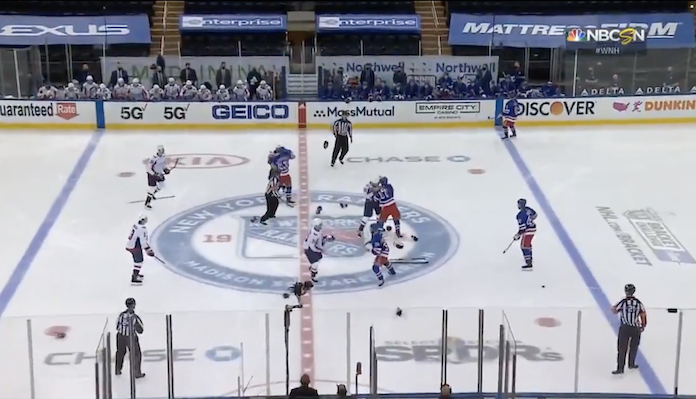 Bad blood between the New York Rangers and Washington Capitals resulted in a full line brawl at the opening faceoff on Wednesday night.

On Monday night, Capitals forward Tom Wilson was involved in another controversial play that resulted in Rangers star Artemi Panarin getting injured and being deemed out for the season. Wilson was only given a minor penalty for punching the Rangers’ Pavel Buchnevich in the head while he was on the ground and wasn’t punished for injuring Panarin in the scrum. While the referees didn’t punish Wilson much for the situation, it was still fully expected that the NHL itself would suspend Wilson as a repeat offender.

However, when the league handed out its punishments, Wilson escaped any sort of suspension, which surprised a lot of hockey fans. Instead, he was given a $5000 fine. Because he wasn’t suspended, the Rangers were very upset, and even publicly called for the job of the head of the NHL department of player safety, former enforcer George Parros. There were hints that a brawl would take place in the rematch on Wednesday, and it did.

Check out the full line brawl from the opening faceoff between the Rangers and Capitals on Wednesday night. It was quite a scene as three separate fights broke out at the same time.

Brawl at the Garden one second in between #Rangers #Capitals
pic.twitter.com/33LmloR3Ms

Not long after the line brawl broke out after the opening faceoff, another fight took place.

More fights in #Rangers #Capitals this is a brawl and absolute madness at the garden pic.twitter.com/Yut2wUhfPM

We then were treated to another brawl between these two clubs.

Ryan Strome takes on Lars Ellers in yet another fight in the #Rangers #Capitals game… A classic brawl. #Hockey pic.twitter.com/0Z2ErRnRJN

There have been 12 fighting majors and 72 penalty minutes handed out in the first period of this game between the Rangers and Capitals so far, and there are still two periods to go. You have to imagine another fight or two takes place, but hopefully, not one is seriously injured. Of course, this all could have been avoided had the league punished Wilson.

What do you think of the bad blood between the New York Rangers and Washington Capitals?