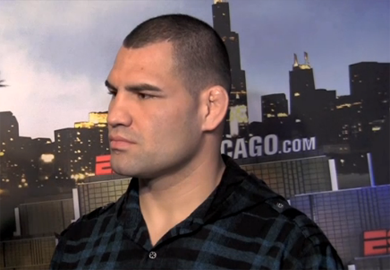 The first of which comes way of the video post above where the champ discusses the PED testing and alleged use by Alistair Overeem.

The second comes way of an ESPN article where he responds to the highly publicized challenges coming out of the UK by a boxer that goes by the name of Fury.

“I didn’t know who he was until this,” Velasquez told ESPNChicago.com. “I think he’s using my name to gain publicity, which he has done, everybody is bringing it up.”

“I challenge u to fight all in in a cage or ring! It could be billed as the man vs midget lets get it on!” Fury tweeted.

Velasquez smirked a bit when reminded of the insult, but he wasn’t taking the bait.

“I’m not a boxer,” he said. “I’m a mixed martial artist, and if he wants to fight, he can go into the UFC and work his way up like everybody else does. Nothing is given to you in this world.