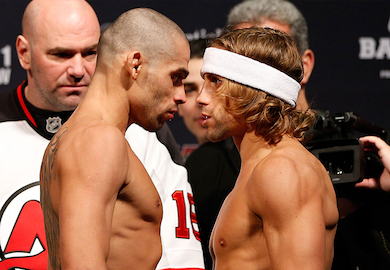 Urijah Faber lost a controversial championship bout against UFC Bantamweight Renan Barao last Saturday at UFC 169. Faber later on admitted he suffered an injury only eight-days into his training camp.

MMAWeekly’s Erik Fontanez transcribed the following from the UFC 169 Post Fight Press Conference: “Eight days into this camp I tore my hamstring [and] bruised my patella tendon,” Faber stated.

Despite losing in controversial fashion, Urijah Faber remained a class-act and tried his hardest to not pass the blame on Herb Dean. Faber’s classiness continued in the post fight press conference when he admitted the hamstring was not a problem when fight-night rolled around, stating the injury was not the reason he lost.

“It was just a minor tear of my hamstring and a deep bruise of my patella tendon,” Faber said. “I was doing mitt work like twice a day. I wasn’t able to spar. I only sparred once for this camp, but honestly today I felt great coming into the fight. I was worried about that coming in, but things just healed in time.”

How many fights does Urijah Faber need to get another shot at the title? Do you think it is time for Faber to jump divisions? Share your thoughts in the comment section below!