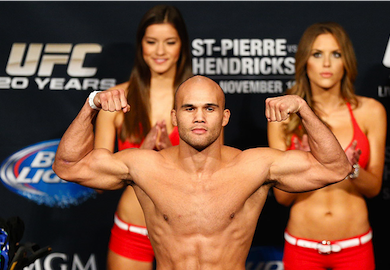 The UFC just confirmed, through their special Fox Sports 2 broadcast, that Robbie Lawler is cleared for his shot at UFC gold even if Johny Hendricks fails to make his contracted weight.

Earlier today, the UFC held their official weigh-ins event for all UFC 171 fighters to hit the scales and make their bouts official.

Johny was given two-additional hours to make the weight-limit. If he cannot, the fight remains tomorrow’s main event and will also remain five-rounds. The only variance with an overweight Hendricks is that he will no longer be eligible to win the UFC welterweight title.

So if Lawler wins, he win the title, if he loses, the title remains vacant.