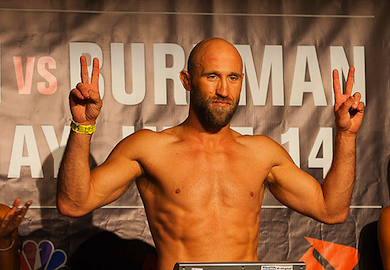 Earlier today, Josh Burkman (27-10 MMA) and his WSOF employers had a very public dispute on twitter, which stemmed from the welterweights request to be released from his contract with the promotion.

Now, it appears that “The People’s Warrior” will remain with ‘World Series of Fighting’ and will soon fight for the organizations welterweight title.

“I’m happy to tell you that we spoke with Josh Burkman, and everything is good,” WSOF exec Ali Abdelaziz told MMAjunkie. “We had a few issues to work out, but everything is good, and Josh will now fight for the welterweight title against the winner of Rousimar Palhares and Jon Fitch.”

“Josh has done some incredible things in his five fights with us. His win over Tyler Stinson last week was amazing, and he had a great fight against Steve Carl for our first welterweight title. Now he’ll get another shot at the belt after Rousimar Palhares and Jon Fitch fight in July.”

The Rousimar Palhares vs. Jon Fitch title fight will headline the ‘WSOF 11’ event, which takes place July 5. It is expected that Burkman will receive his title shot at some point this winter.