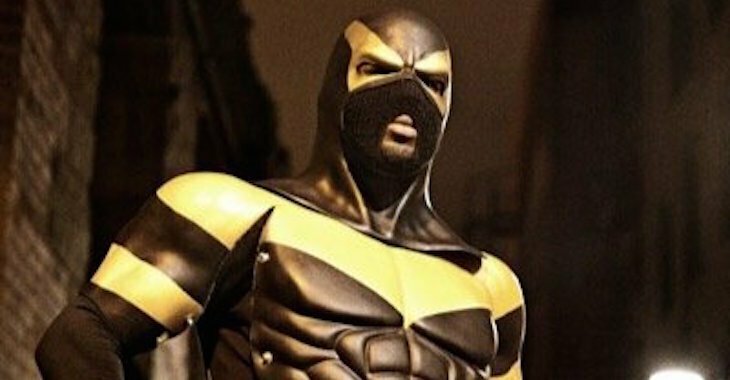 Ben Fodor is a professional mixed martial artist. Phoenix Jones is a costumed clad, real life super hero who patrols the streets looking to ward off the evildoers. The two personas belong to one person. An exciting MMA fighter and a vigilante who walks the streets armed with a can of pepper spray, watching out for public disturbances. There have been several great stories and characters in the sport of MMA, but it can truly be said that the story of Ben Fodor aka Phoenix Jones is one of a kind.

Fodor will make his debut for the World Series of Fighting on Friday night. Before signing with the promotion, Fodor wasn’t even sure he would be pursuing MMA much longer due to the lack of financial stability. He wasn’t making enough money fighting locally to validate doing the sport for much longer. Then, after a video of his story was featured on ESPN’s SC Featured, Fodor began to receive offers from major MMA promotions.

So out of all the MMA promotions to reach out to him Fodor decided to go with WSOF. But why?

“One, it came down to negotiation tactic” Fodor told BJPENN.COM, “but two, it came down to just their general–I got a good feel from them, that they actually wanted to like hear what I had to say, cared about me as like a fighter. There was things that weren’t on the table for other leagues, that they were trying to get, that the WSOF didn’t try to take at all, ever. Like owning rights to Phoenix Jones, telling me when I can and cannot patrol. There were things that the WSOF didn’t care about. They were like we know you’re a legitimate fighter and this back story helps us sell that. But they don’t make any money off me being Phoenix Jones. So I know they’re not going to fight me once, shelve me and then try to make a movie deal.”

One has to wonder if one of those MMA organizations that reached out to Fodor happened to be the UFC. Unfortunately due to confidentiality issues he wasn’t able to say yes or no, but he did say, “What I can say is that literally every organization that I could possibly think of [reached out].” I think we can all agree on what that means.

Ahead of his debut in a major organization Fodor said things are going well, except for the “fair percentage of hate mail” and “fighters calling [him] out left and right because they think [he] suck[s].” Fodor says fighters from all ranks and locations have been calling him out saying that he isn’t a real fighter and the whole situation is really strange to him, “I’ve always felt like the good guy and I’m starting to feel like the bad guy which is weird,” said Fodor, “I’ve beaten up legitimate fighters, so you’d think the word would be out by now.”

Fodor is currently 5-0-1 in his professional MMA career, with all fights taking place in the welterweight division. He will again fight at 170 lbs. on April 10 when he faces Emmanuel Walo at WSOF 20, but win or lose he’s already got his eye set on another weight class. Fodor says he thinks he likes the fights better at the WSOF’s lightweight division more than his current weight class. He is unique in his honesty, saying that he doesn’t like his chances against fighters like Rousimar Palhares, who he calls “specialist”. According to Fodor, in his head, at this point in his career, he sees Palhares beating him 9 out of 10 fights, with that one win coming because Palhares falls on a banana peel. At the lightweight division he sees a lot of well-rounded fighters, and that’s more exciting to him.

Fodor isn’t full of false bravado and doesn’t claim to be the greatest fighter of all time. He also is in no hurry to reach the title in any division, saying, “I want to be the champ, obviously, but I don’t like wake up and sleep at night thinking ‘oh man, I want to be the champion of the world’. I don’t think that way. I think that I want to beat the next guy they put in front of me and I want it to be a little bit better than the last guy and I want it to be a little tougher. It’s sort of like comic books or in Dragon Ball Z, the bad guys got progressively crazier.”

Speaking of the next guy put in front of him, Fodor had plenty to say about his upcoming opponent. After watching some of Walo’s past fights Fodor came to the conclusion that, “They’re not exciting, they’re boring.” Walo, who will be fighting in the WSOF for the second time, is 7-2-1 with one KO and one submission win.

“His hands are super clean,” admitted Fodor, “he’s got good clean hands, clean blocking, clean punching. There just isn’t a lot of power there so it doesn’t really scare me. I mean, getting hit in the face thirty times with no power doesn’t really do much, but it is clean.” He continued, “He’s got good kicks and there’s a lot of power in those kicks so that’s actually what I see as the most dangerous stand up weapon he has, they’re good body kicks.”

About that whole two names thing, Fodor says he’s not sure which one he will be fighting under, although for all his past fights he’s been the mere mortal Ben Fodor. But he admits that the promotion may want to use his superhero alter ego to get more attention, which is fine with him.

Fodor says he is still patrolling as the masked crusader, (at the time of this interview he was planning on going out the night after) and doesn’t plan on stopping anytime soon. In fact, with the money he earned from signing with the WSOF he says it will be easier, “because [now] I can pay for the gas.” He’s also ordered a new upgraded super suit. Oh and about the name itself, Fodor says it came to him fairly quickly, “Phoenix is my son’s name, one of my son’s names–I’ve got a couple– and Jones is the most common last name in America the year I was born.”

For those who didn’t know, Fodor is the brother of former Strikeforce and UFC fighter Caros Fodor. [Ben] Fodor is a black belt in taekwondo and began his amateur career in 2006. Although he would consider himself to be more of a stand up fighter, he acknowledged that he has more submissions on his record than knockouts, but says that’s probably just because after you rock someone it’s a lot easier to lock up a submission.

Whether he’s Phoenix Jones or the man beneath the cowl, Ben Fodor, it seems as though there is never a dull moment in this guy’s life, so make sure you catch him in the cage Friday at 9 p.m. ET on NBC Sports at WSOF 20.