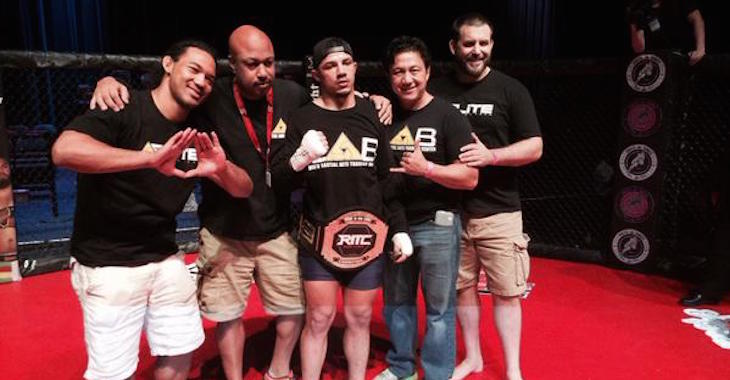 On Saturday June 6th Undefeated lightweight Drakkar Klose steps into the ring for the Rage in the Cage 178 event. I was able to conduct a phone interview with the promising MMA LAB fighter. A former high school and collegiate wrestler Klose hopes to make a big impact this weekend and continue his climb in the MMA world.

We discussed how working with the MMA LAB has helped his progress as a mixed martial artist, and what he hopes to attain. Even though he trains at one of MMA’s biggest camps he remains grounded and each member of the team contributes to each other’s success.

Ironically he never thought he’d be a fighter. However a chance viewing of one of Benson Henderson’s fights lead him towards mixed martial arts and an opportunity to work with one of the best camps in MMA.

Keith Harmon: This is Keith Harmon I’m on the phone with Drakkar Klose who is going to be fighting at Rage in the Cage 178 on Saturday June 6th in Prescott, Arizona. Tell me how working with the MMA Lab has helped you to progress.
Drakkor Klose: Everyone there, when I first came there, I was good, but there are so many different style and working with them has made my game a lot better.

KH: Tell me about the leadership and your fellow fighters
DK: Benson [Henderson] he is a great leader he’s pretty much the captain of the team. He runs the show everyone looks up to him. Great leadership.

KH: He’s a former UFC champion that’s a big boon to have. How does the community perceive the MMA Lab?
DK: Really good every time people come up and ask where I train and Ben always talks about that it’s a real good gym. We’re always helping people. People really love that gym.

KH: Do you do any community outreach programs or do any seminars?
DK: We try to do anything like fundraisers, donations, charity events, a food drive at the gym. We’re always doing something for the community. We always want to give back.

KH: It’s always good to help less fortunate. In the last 12 months, what have been your biggest improvements as a fighter?
DK: Being more mentally strong. Thinking about what I’m going to not just go in there and destroy someone. And growing as a person.

KH: Who do you owe these changes to? Coaches and teammates?
DK: Everyone in the gym all the way from Benson and all the way to the amateur guys. Everyone contributes we’re a the team. It’s not just one person it’s everyone.

KH: You’ve been a wrestler since the fourth grade. How has the conditioned you to be a fighter?
DK: I feel really comfortable; I’ve wrestled over 1000 matches. That gives me an edge over people that have just started fighting or are new to this sport. I think wrestling is a big part of my foundation.

KH: What drives you to succeed in the gym or a fight?
DK: I’ve been doing this forever, this is all I know to just compete. My mom she dedicated her life and time. I think about my mom a lot. And hopefully I can make enough money to take care of her.

KH: Good to have a good strong family base. Glad she’s helped you out a lot. How do hope to improve over the next 12 months?
DK: Everything. Every part of my game, mental, physical. Mostly on the ground game. Some better Jiu Jitsu.

KH: The southwest has a huge MMA following. A lot of big camps in California and Arizona. Any reason why you chose to train in Arizona?
DK: Arizona you can train all year round. Great people out here. I love it out here. I’m from Michigan. Michigan is my home but Arizona is my second home.

KH: I guess it gets pretty cold in Michigan.
DK: I wouldn’t be able go jogging or lose weight any time I want like out here.

KH: Who are some of your favorite fighters before you got into MMA? Anyone in particular you enjoyed watching?
DK: What’s funny is I told Benson what got me into fighting. I never thought I was going to be a fighter. I was flipping through the stations and it came up on one of Benson’s fights. Just his whole mentality. He was never tired, after a round he’d get up and start bouncing around. I always thought I had that type of style. Benson is what got me into fighting. And luckily I got to train with him. And I help him out with his camps. It’s pretty cool.

KH: Ever think you’d actually train with him?
DK: I didn’t know I would be training with him. And once I got the opportunity. I look up to Benson a lot. I learned a lot from him. Just watching him and the way he carries himself.

KH: In one of your amateur matches against Jeff Thornton. You hit him with a pretty big slam early on. I was impressed. Are we going to see some more slams in the future?
DK: Of course. That’s my style; I like to get the crowd into it. That’s the type of fighter I am. Whatever comes or whatever they throw at me. I like to go for big things. Hopefully this Saturday you’ll see a couple slams and good stuff.

KH: Another thing, with your interview with MMA Junkie, you said a lot of people don’t want to fight guys from the LAB. Is that something that’s happened this time? They’re like, “a guy from the LAB I want to back out.”
DK: I believe so, because most of our guys will they’ll have fights two weeks out and the other guy drops out. It kind of sucks, but you can’t run forever.

KH: So what do you like to do in your down time? How is life in Arizona?
DK: Life out here is great it’s always sunny. So I really can’t complain about Arizona.