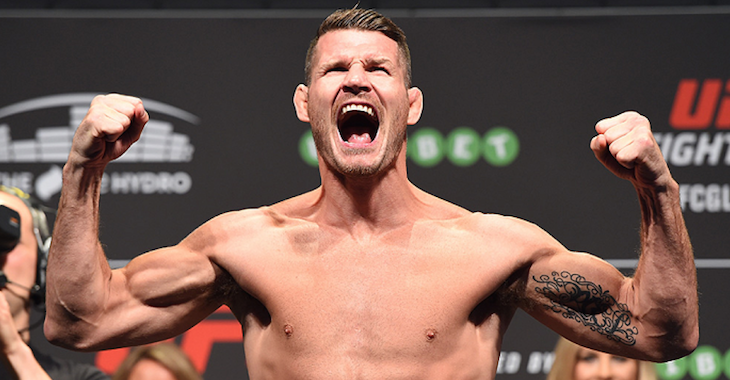 In the main event ‘The Count’ Michael Bisping took on Brazilian Thales Leites.

Leites landed an early let kick. Then Bisping ate a shot to the groin, and the fight was stopped for a moment. The fight resumed. Bisping looks for a jab, then a combo. Leites came forward with a big punch but misses. Bisping was landing a jab then getting out of the way of Leites big punches. Bisping went for a head kick, but missed. Leites landed another nice leg kick. Bisping returns the favor with two nice leg kicks. Then Bisping gets the fight to the ground. Leites gets up and takes Bisping’s back standing up. They end the round against the cage.

In the third Leites came out swinging again. Leites backed Bisping up to the cage and connected with a massive punch that rocked him. Then he connected again and it looked like Bisping almost dropped but they clinched and he recovered. They separated and moved away from the cage. Bisping gets creative, goes for spinning back kick, but it’s blocked. With a minute left Leites gets the takedown, but Bisping gets right back to his feet. Leites comes forward with an uppercut that lands and rocks Bisping, but then he cliches him on the cage.

Leites pushed Bisping to the cage and tried to tee off, but Bisping got away. Leites tried for an uppercut, Bisping landed a good leg kick. Bisping had a much better round, landing combos and staying out of the way of big shots. Leites lands a nice jumping switch kick at the end of the round.

In the fifth round Leites came out aggressive with a lot more offensive output. He cut off the octagon for Bisping and tried to land big shots. Bisping was landing too, with a nice combo that ended with a head kick. Bisping was really connecting with his punch combos, but Leites kept shaking his head saying it didn’t hurt him. Close fight.