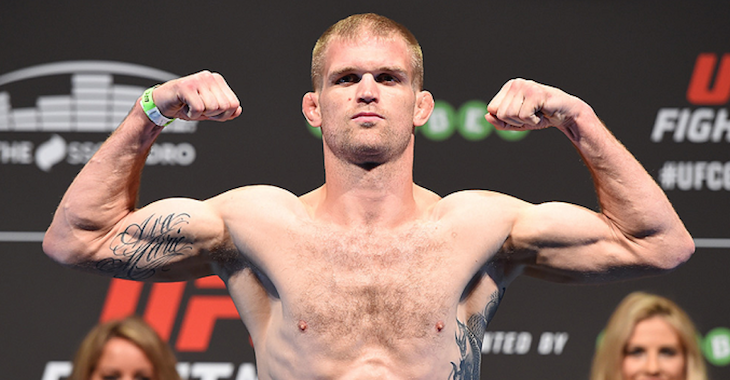 In the co-main event UFC lightweights Evan Dunham and Ross Pearson duked it out.

Dunham threw a head kick that was blocked by Pearson. Pearson came forward and landed a nice shot. Moments after that Dunham pushed in and got the takedown. Pearson got to his feet quickly, but still had Dunham pinning him on the cage. Dunham picked him up and slammed him down, then jumped with to the back of Pearson. Dunham locked in the body triangle and started looking for the choke. Pearson escaped but Dunham grabbed the arm and went for the armbar. It was tight, but Pearson gutted it out. He was in a lot of pain, but got through it and got out. They stood up and exchanged right before the round ended.

Right away in the second round Dunham went for and got the takedown. Dunham controlled him on the ground, keeping him down and looking to take the back. Then, when they were on their feet Dunham picked Pearson up and put him down again, went right back to the back of Pearson. At the end of the round Dunham threatened with another armbar, but ran out of time.

Going into the third Dunham knew he was up on the score cards and Pearson knew he needed a finish. Dunham simply rode Pearson the entire round, pushing him on the cage and clinching him there, going for a takedown. Pearson tried to separate to land shots but Dunham never gave him the chance. Dunham got a final takedown right as the fight ended.