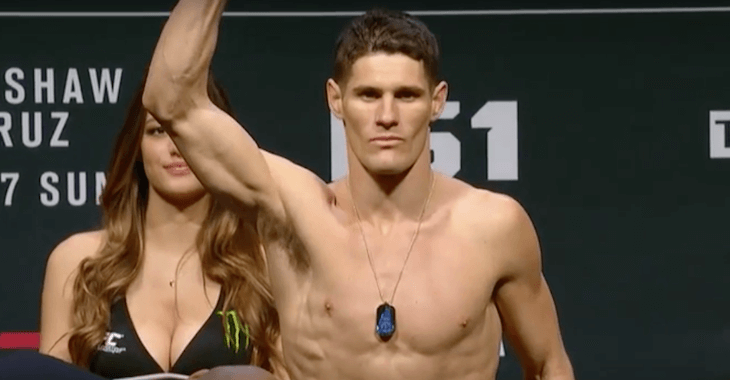 Featherweights Kyle Bochniak (6-1 MMA) and Charles Rosa (11-2 MMA) squared off in the third bout of ‘UFC Fight Night 81’ in Boston.

Round one begins and Rosa throws a side kick and then another. Kyle is trying to pressure forward but Rosa is frustrating him with kicks. Kyle scores with a big right and Rosa hits the deck. Bochniak rushes in but almost gets caught in a leg lock. Both men scramble to their feet. Rosa shoots in and scores a takedown but it is short lived. Bochniak back to his feet to land a decent left before round one ends.

Round two starts off with more kicks from Rosa. Charles is chopping at Kyle’s legs but Bochniak is countering well. Midway point and Rosa dives in for a takedown but is stuffed by Bochniak. Big right misses from Kyle and Charles pushes forward trying for a takedown. The fighters separate and exchange body kicks. Good leg kick from Rosa lands. Big takedown for Bochniak before the end of round two.

Rosa pushing forward with kicks and punches to begin round three. Kyle Bochniak is throwing bombs. Amazing that he took this fight on 4 days notice. Good right hand from Kyle. Another right and a big left. He is throwing bombs. Rosa responds with a big punch and leg kick. Kyle shoots for a takedown but doesn’t get it. Rosa with a good combo followed by a knee. One minute left. Rosa looking for a guillotine on a now bloodied-up Bochniak. Fight ends with both men trading big shots.