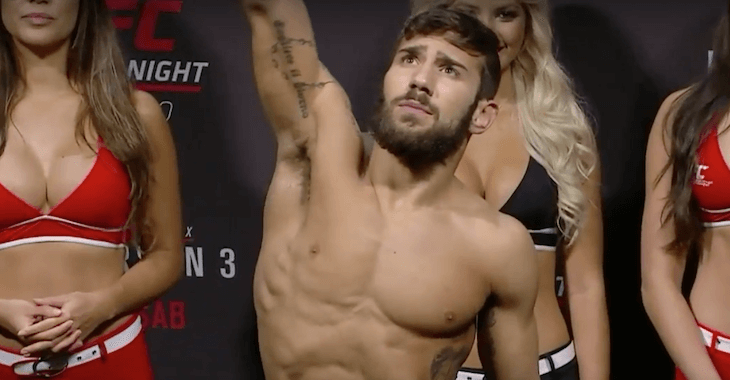 The second bout of the evening featured a bantamweight showdown between Pedro Munhoz (11-2 MMA) and Jimmie Rivera (18-1 MMA).

Jimmie Rivera had a three inch reach advantage on Pedro Munhoz and it showed early in round 1. Rivera was able to land punches consistently for the first four minutes of the round before Munhoz began to slowly find his range. Munhoz landed a big knee towards the end of the round but Rivera seemed ok and the bell sounded.

Rivera began round two by continuing to utilize his reach. He landed a few clean shots which hurt Munhoz bad. Jimmie was on wobbly legs but pulled out a huge right hand that rocked Rivera right back. Both men were hurt but continued to fire away with shots. Rivera’s punches seemed to have more zip as he continued to land more often than Munhoz to finish out round 2.

Round three was more of the same. Rivera was landing the cleaner shots of the two, but Munhoz continued to press forward in a Terminator-like fashion. Rivera shot in for a takedown towards the end of round three but was unsuccessful. The fight would end with both men trading punches, much to the pleasure of the Brazilian crowd.