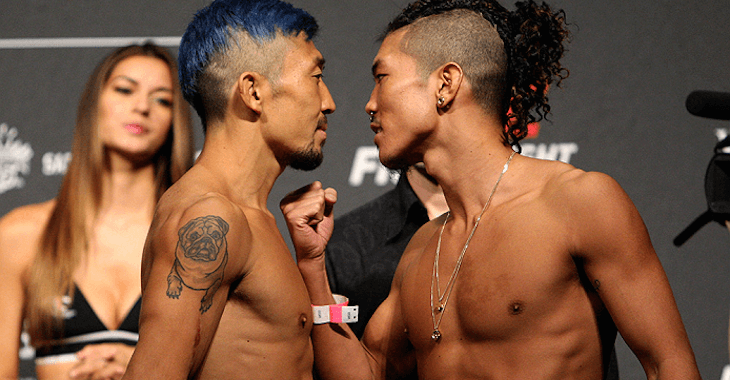 In the first fight on the main card, the ‘Road To Japan’ final took place between Mizuto Hirota and Teruto Ishihara.

Teruto came out with a huge body kick, then followed up with another one. Both of these guys looked rally fast. Hirota threw a kick, but Teruto sort of caught it and Hirota went down. He got right back to his feet though. Teruto seems to want to come in with huge punches, than duck out quickly. He showed good movement and landed several massive punches. Hirota was still game though and kept moving forward. It looks like Hirota got dropped right at the end of the round.

In the second Hirota got dropped again, but got right back to his feet. They kept the fight on the feet and both looked to land big punches. With about two minutes left Hirota managed to get Teruto on the cage, then got him down for a moment before he got back to his feet. My god, at the thirty second mark these guys started teeing off. Teruto looked like he might be getting tired, but still swung like a wild man.

Hirota must have an iron chin because he continued to eat big punches and just kept moving forward. He managed to land some of his own shots as well. Tertuo looked to be slowing down. Hirota kept putting him on the cage. Man, these guys just left it all in the cage. By far it was the best fight of the night, so far. Both men refused to back down and just looked to take each other’s heads off with every punch. Very close fight as well.