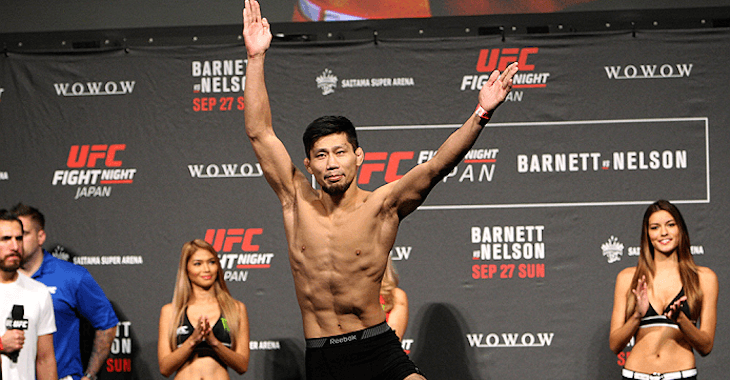 Li Jingliang and Keita Nakamura came out guns blazing in their preliminary fight.

It didn’t take long for Nakamura to get the fight down. From there he worked in the full guard and attempted to land some nice ground and pound. Jingliang kept a pretty tight guard and protected himself pretty well on the bottom. The fight stayed in that position for a while, with Jingliang holding tight, keeping Nakamura from posturing up at all. with about thirty seconds left the referee finally stood them up. At the very end of the round Jing was able to land some real nice punches, still the round most likely went to Nakamura.

In the second Jin came out swinging. He continued to land big shots, even his jab was sending Nakamura’s head back. Jing kept landing, obviously he had the advantage on the feet. He kept cracking Nakamura. At point he dropped him and went in for the finish. He landed some big ground and pound but Nakamura survived.

The third looked similar, with Jing landing big punches. Then it was him who shot in and got a quick takedown before Nakamura got up. Then they went back to striking. Again, Jing shot in for a takedown. Nakamura sprawled then they scrambled and Nakamura was able to jump on Jing’s back. Jing was standing but Nakamura was on his back, with a rear naked choke locked in deep. Jing tired to fight it but eventually went out and went limp, dropping to he mat with Nakamura still on his back. He was out.