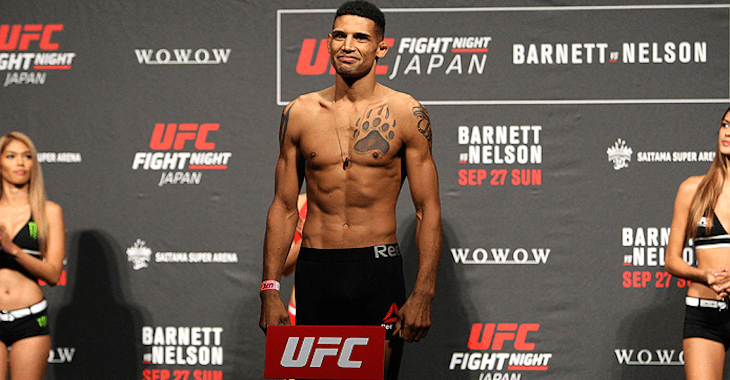 At the start they both came out and went through a rather long feeling out process. Both of them just moved around the octagon, no one really throwing much of anything. Johnson went for a few kicks, but was obviously out of range. They were both just bouncing around, then Johnson actually landed with a punch that looked to stumble Kotani. Johnson recognized and tried to follow up. He landed a good head kick that was partially blocked. Kotani survived and then he shot in, trying to get a hold of Johnson. He wasn’t able to get him and they broke free from each other. Then they went back to just bouncing around the cage. Johnson stayed on the bike and kept him chasing him for the rest of the round.

In the second Johnson came out as the aggressor, walking Kotani down. Kotani shot in but failed and Johnson went back to backing up. Then he caught Kotani with a beautiful punch that dropped him. He postured up over him and stared landing big punches. It looked as though it might be stopped but Kotani got out of there and back to his feet. Moments later Johnson again got him down and stated landing big shots. And again, Kotani managed to get to his feet, really showing heat because he was getting hit with big shots. It was a big round for Johnson, but man Kotani’s a robot or something because he took huge shots and managed to survive the round.

In the third round, about a minute in, Kotani was able to get Johnson to the ground. At one point Katoni went for a leg lock. That was the best round for Kotani, he probably even won it, but too little to late.