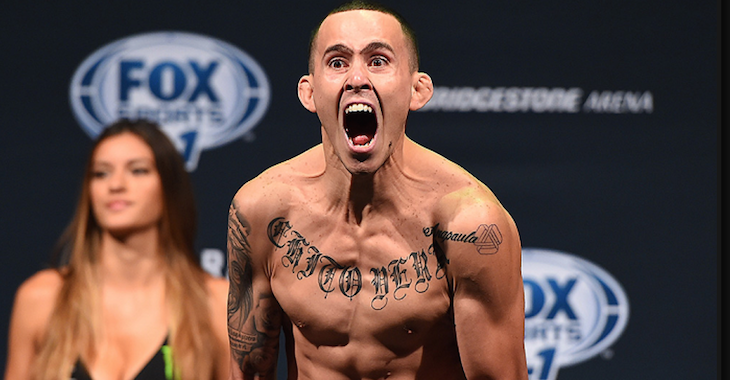 Roman Salazar took on Marlon Vera in the second fight of the night, broadcast on UFC Fight Pass.

Salazar went for the takedown early and got it, but in the process almost got reversed and caught in am armbar. He got out and took top control, working in Vera’s full guard. Salazar seemed content with working in that position, landing short punches and elbows. Eventually the referee stood them up. Vera landed a nice body kick, then another, then Salazar rushed in for a clinch. He got it and pushed Vera to the cage. Vera goes for a double flying knee towards the end of the round. Then, things get a little choppy right after the bell. Vera continues to swing.

Right away in the second, Salazar starts things off with a few punches, then goes in for the clinch again. He gets it and gets a trip takedown. He almost got to Vera’s back right away but ended up in full guard. Salazar stayed in full guard and tried to land short shots. The referee urged them to keep active. Eventually Vera threw his legs up and locked up a triangle. At first it looked like Salazar might be fine, but then Vera adjusted and started landing with big elbows. He grabbed the arm and cranked it, forcing Salazar to tap.

RESULT: Vera wins via submission (armbar) at 2:15 of round 2