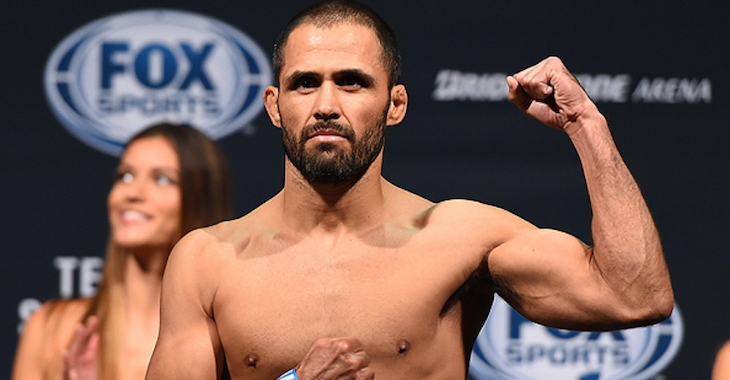 In the first fight on the FS2 prelims, bantamweights Sirwan Kakai and Frankie Saenz faed off in the octagon.

Saenz stuck first with a leg kick, then Kakai return the favor. Saenz then landed with a massive body shot. Kakai landed another leg kick. Saenz came forward and found a home for that body kick again. Saenz rushed in, grabbed the clinch and landed a few big knees to the body. Kakai almost lands a trip takedown but Saenz stays standing. Kakai then got the clinch on the cage and got the double leg takedown. Saenz tried to get up and did. They broke away and Saenz landed a nice combo. Saenz continued to grab the clinch and land big knees and short punches. Kakai landed a nice counter hook. Saenz moves in at the end of the round gets Kakai on the cage.

Saenz almost found a home for the big right hand early in the second round. Saenz tried for a takedown but Kakai showed good defense. Saenz started to get a little wild with his strikes. Kakai lands a nice jab, then big punch to the body. Saenz lands a quick takedown but Kakai gets right back to his feet. Kakai landed several nice jabs. Saenz came forward and clinched but Kakai grabbed the double leg and got the fight to the ground. Saenz go to his feet and connected with a massive elbow. Kakai kept landing with the counter left.

In the third the fight went to the ground and it was Saenz who almost locked in a rear naked choke, but lost it. The fight went back to the feet and Saenz continued to land knees to the body and clinched Kakai on the cage. Saenz kept him on the cage and landed a nice elbow in close.