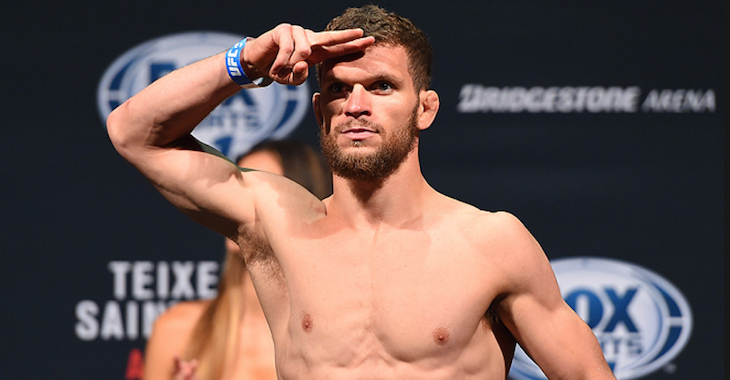 The flyweights took the stage when Willie ‘Whoop as*’ Gates took on Dustin Ortiz.

Gates came out on fire. He threw a big front kick right away but missed. He landed a few nice punches, then Ortiz moved in and grabbed him for the clinch. He pushed Gates to the cage and looked for a takedown. He managed to get Gates down. Gates works and manages to get back to his feet. Ortiz landed with a counter right. Gates throws a body kick but Ortiz gabs it and gets the takedown. Right away Ortiz moves to mount and tried to lock up the arm triangle. Eventually he let it go, but still worked from full mount. Ortiz kept the mount and landed decent ground and pound before the round ended.

In the second round they exchanged briefly on the feet until Ortiz moved in and got Gates against the cage, in the clinch. They break briefly but Ortiz goes right back into the clinch. Gates tries for a standing choke but lets it go. After a while of clinching Ortiz eventually got the trip takedown and landed right into mount. Ortiz started unloading with big elbows. Gates turned and gave up his back. Ortiz went for the rear naked choke and it looked tight but Gates survived. Ortiz kept top position in mount and unloaded with punches until the round ended.

Ortiz does the same thing in the third round. He got the clinch on the cage, then landed the takedown and moved to the back of Gates. He worked for the rear naked choke, unloading punches in the process. Ortiz trapped one of Gates’ arms and started pounding him with elbows and punches. It looked bad but eventually Gates got his arm out. Still Ortiz had top position and was relentless with his punches. Eventually the referee stepped in and stopped it. Gates was doing nothing but eating big punches.