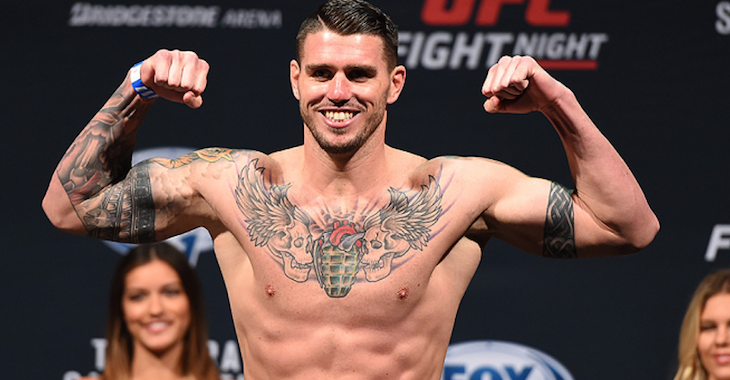 Chris Camozzi took on Tom Watson in a middleweight fight during the UFC Fight Night 73 prelims.

The fighters clinched early. Each fighter struggled for position and landed short knees and punches. They broke away and it was Camozzi who landed a nice combo. Watson shot in and Camozzi immediately locked up a guillotine. It was tight but after a little while Watson got out. He again shot in for a takedown but Camozzi defended and stayed on his feet. Watson pushed him to the cage. Camozzi reversed and separated. Camozzi really started landing. He got a foot trip and went immediately to the back of Watson. Watson turned and Camozzi stayed on top in side control. Watson again tried to move out and gave his back up. Camozzi went for the choke again. Watson escaped and they both got to their feet. Camozzi ate a shot to the groin and the fight was paused. They restarted and Watson came out with two big kicks. They clinch and Camozzi lands a good knee to the body.

Both fighters land nice leg kicks at the start of the second round. Watson shot in for a takedown but Camozzi defended. Watson put him on the cage in the clinch. Watson landed a knee to the groin of Camozzi and the fight was paused again. Watson loses a point. When they restarted both fighters started swinging big punches. Watson landed with a few big punches. They clinch up again and work their until they break. Camozzi landed a few nice jabs. Watson clinches him on the cage but Camozzi breaks away. Watson shot in again and Camozzi sprawled and looked for a choke but Watson got out of it. Watson comes in with a jumping knee that looked like it landed, but right away Camozzi drops and goes for a takedown. He doesn’t get it and they break away. Camozzi landed nice jabs when Watson tried moving in. At the end of the round Watson managed to get a quick takedown.

Both fighters found success landing big punches in the third. Camozzi kept connecting with the jab. They also both looked extremely tired. They clinched up and Watson landed a big elbow right to the cage of Camozzi. Watson threw a punch that missed, Camozzi ducked under and got an easy takedown. Watson eventually got to his feet and they clinched on the cage, both landing short knees and punches. Camozzi scored another takedown but Watson managed to get up again. Watson moved forward and put Camozzi on the cage right before the fight ended.