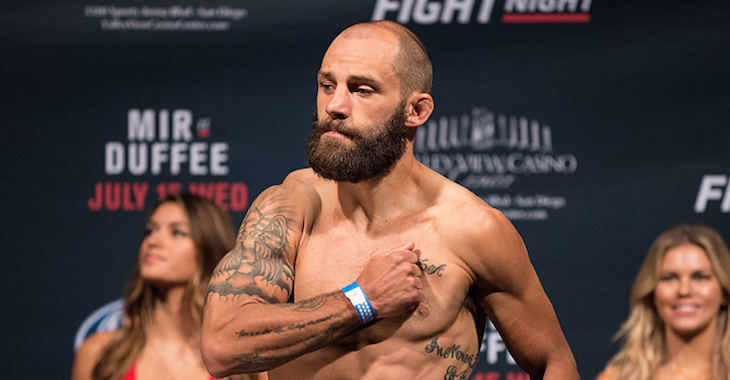 In the featured prelim Yaotzin Meza took on Sam Sicilia. They went right to the center and got started. After exchanging briefly, Sicilia got a nice trip takedown and started working from full guard. Meza transitioned, Sicilia went for a guillotine, but Meza countered, got free then went for his own guillotine. Sicilia got free and moved to top position.

Sicilia went for a guillotine again but Meza got out once more. Sicilia stayed on stop, going for the back of Meza. He let go and stood up. Then he dove down, but Meza countered, got top position. Both fighters went for guillotines again. Sicilia recaptured top position and held it until the round ended.

In the second, the fight stayed on the feet more. They clinched up briefly, but broke away. Meza threw a body kick that Sicilia caught and landed a big right hand. They clashed together again and Sicilia grabbed the neck, looking for the choke again. He didn’t get it, but got top position, then stood up. They started swinging at each other. Meza went for a takedown, but Sicilia sprawled. Meza eventually got the takedown before the round ended.

In the third they came out swinging. Meza shot in but Sicilia sprawled and took top position. Meza tried to stand up and again Sicilia went for the choke. He didn’t get it but got Meza down, then tried for it again. He couldn’t get it locked up. Meza got to his feet and tried for his own takedown, but Sicilia brushed him off and got his own. They stood up. Sicilia shot in but Meza jumped on the choke. It looked pretty tight, but Sicila got his body free and took top. Sicilia ended up losing the position at the end of the fight.