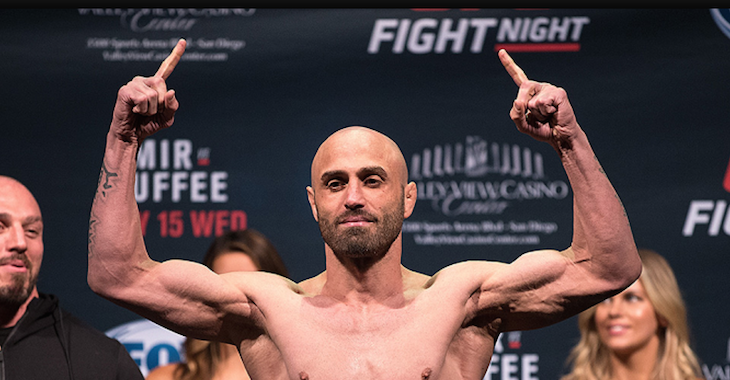 UFC bantamweights Manny Gamburyan and Scott Jorgensen faced off in the octagon in the third fight of the main card.

Early in the first Gamburyan went for a takedown but failed. Moments later after eating a big punch, Jorgensen went for a takedown. Manny grabbed the neck and went for a choke. Jorgensen picked him up and slammed him down, but Manny held on to the neck. They scrambled and Jorgensen got free. Manny managed to get Jorgensen down twice. Jorgensen got to his feet and clinched Manny to the cage. Manny ate a groin shot and the referee stopped it for a moment. Manny reversed the clinch and got a slam takedown. Jorgensen got up and they cliched again. Jorgensen started teeing off on Manny but then got dropped with a big counter. Manny rushed in and started pounding on Jorgensen, but he managed to get back to his feet. A little while later Manny lands with another big counter.

Jorgensen connects early in the second. Manny lands a big groin shot on Jorgensen. The fight gets back underway. Manny rushed in and clinched Jorgensen to the cage. Jorgensen broke away and landed a nice body kick. Then Jorgensen tried for a single leg takedown. Manny sprawled, but Jorgensen kept on him, pushing him to the cage. Both fighters broke away and went back to the center. Manny moved in for a takedown and Jorgensen defended, but Manny pushed him to the fence in the clinch. Manny dropped to get a takedown. Jorgensen defended, and eventually reversed and went for his own takedown. He failed and Manny took control until the round ended.

In the third, the fight stayed on the feet and both fighters exchanged punches and kicks. It was definitely Jorgensen’s best round, but still, Manny connected with a few big punches and leg kicks. At the very end both fighters stood in front of each other and looked for a final big shot.