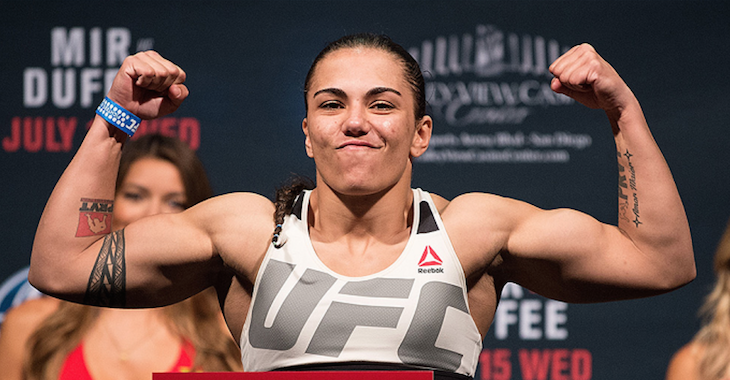 The women duked it out in the octagon when Sarah Moras took on Jessica Andrade.

Moras shot in for a takedown early, but Andrade sprawled. Andrade landed a nice body shot. Moras moved for a takedown again but Andrade reversed and got a throw. Then she stood up and moved away, telling Moras to get up. They started exchanging on the feet. Andrade landed a few really nice punches. Moras fired back, then shot it. Again Andrade got away. Moments later it was Andrade who ended up on top in guard. Moras almost had an armbar but Andrade got free and stood up. Moments later Moras again shot in, then pulled guard. Andrade stood up and so did Moras. Andrade wanted no part of the ground game, but started landing big punches when Moras pulled guard again. Andrade got up and out. they both stood up and Andrade landed a big right hand at the end of the round that dropped Moras.

In the second Moras landed more on the feet at the start, then Andrade got a takedown and started working from half guard. Andrade started landing big hammer fist. Andrade landed a lot of short elbows on the ground. Andrade stood up and let Moras get to her feet. They exchanged and Andrade grabbed ahold of Moras, then picked her up and slammed her. Moras did her best to defend and move on the ground, but Andrade managed to stay on top and land big shots.

Andrade shot in for a takedown in the third and got it. Moras tried to get to guard and defend, but Andrade kept on pounding with punches. Andrade really started pouring it on, Moras couldn’t get to her feet. Then Andrade let her up with 2 minutes left. Moras’ face was a bloody mess. After a brief exchange Andrade takes it down again. With about a minute left Moras went for a guillotine. It looked tight but Andrade got out. Then she went for a trip and Moras reversed and jumped on her back, she had the rear naked choke locke in, with Andrade standing. There was about 15 seconds left. Andrade kept waving her finger saying she was fine. The fight ended.