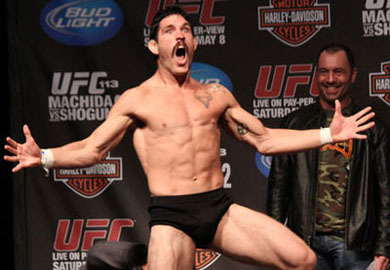 UFC middleweight, Tom Lawlor, recently put out a blog on The Underground forum giving his take on Performance Enhancing Drugs and why he has made the decision to not take them.

This is a hot button topic in the MMA world in the past few years, and with Conte recently saying that 50% of fighters use PED’s it has been brought back up. Not to mention the drama surrounding Carwin/Nelson, numerous failed drug tests, TRT fiascos,etc. Personally I believe the number to be higher than 50% of fighters taking something during the year, whether after fights to help the body recover from weeks and weeks of abuse, using during camps and finding ways around testing positive, or whatever the case may be. I’m not basing my thoughts on just UFC guys, but people over all levels of professional fighting, hell the UFC #’s might be lower than the overall % due to the testing procedures. However as for myself:

Quite frankly, it isn’t worth it to me on various levels:

1) This is probably the sentiment most echo’d by guys who don’t use PEDs, but I don’t want to regret it when I am older and done with my career. I don’t want to spend the rest of my life second guessing my abilities and successes, wondering if it is due to some outside advantage of factor that I didn’t intrisically have.

2)The fine/penalties are too great for me in my career at this time. Sure if I was bringing home bags of cash like it has been reported some guys in Pride did, then the temptation would be greater. For me, being suspended for a year or having a large fine issued to me would be damaging to my life on a day to day basis as I live off of basicaly just my fighter purses. Take my ability to work away, and I’m in trouble financially.

3)I hate needles and don’t want to take the time to do all of the scientific study to make using PED’s not be a detriment to my health.

4) The “brand” of being labeled a user. Once you have been busted for steroids/etc, it will follow you your entire career. Fans are quick to forget your successess but very eager to bring up past failures in many cases, especially regarding the use of drugs.

I understand why people take them, I really do. The ability to improve on a daily basis physically is very appealing, and various PED’s aid in recovery/muscle building/fat loss/etc, and can not only allow you to improve your skillset at a faster rate but also make you more marketable due to looks. If you are a top level guy and the difference between your show money and your win + show is $40k or so, then things start to look differently. It is inherently easier to continue to gain wealth WITH wealth, and a huge lump sum of $ can go a long way in buying homes, vehicles, starting business, retirement funds,etc. Whereas myself, it hasn’t been worth the extra $8-$12k I could have possibly received by using and giving myself a “better” chance of winning. Throw a title on the line? The drive and desire to continue to be at the pinnacle of the sport may allow someone to convince themselves that a PED is a viable option in their career.

Me? I’ll stick with trying to win fights and get fight bonuses, while training my ass off in the gym, going home and being sore and exhausted. I’d rather be in my current position of 4-3 Tom Lawlor in the UFC than be 7-0 UberLawlor and relying on something other than my own guts, intelligence (or lack of), and hard work.