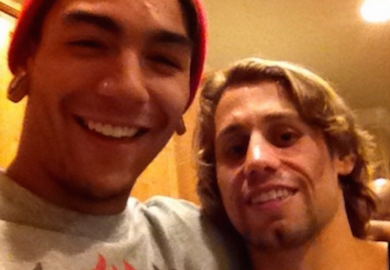 “I had a pretty chaotic, violent upbringing. It was always something. My dad was pretty violent toward my mom and later on, my mom was sometimes violent toward me. It was kind of a crazy, chaotic household, really. My dad was in and out of jail, and he’s in prison now. There was so much trouble and violence all around me.”

“That was something that messed with me a lot. I can talk honestly about it now, and I can see the truth now, and what was really going on. If you would have asked me when I was young if it bothered me and I had too much of an ego to say the truth, so I’d have bulls—-ed and said it did not. It did affect me a great deal, though. I can talk about it now, because I understand it.

“I couldn’t do anything and I was so ashamed. It affected me when I was a kid. I mostly felt ashamed. My dad is this big Samoan dude and he and my mom were always in a physical altercation. I’d take my little sister and hide her to try to keep her safe. I was always kind of ashamed that I didn’t step up and stop my dad, but I was a little kid and he was this big Samoan guy and realistically, there was nothing I could do.”

“Once I was old enough to start going out on my own, when I was 14, 15, I started looking for trouble myself… I was young and stupid and I didn’t think a lot about the consequences of what I was doin. I was an angry kid and I was looking for an outlet. I loved to fight and if something happened, I was ready to go right away.”

“It was a slow transition. I spent a year there getting my ass kicked, because I was still partying and I wasn’t taking fighting seriously. But as I watched Urijah and Castillo and guys like that, and saw how they sacrificed to make themselves successful and how they were committed to living positive, productive lives, I began to get it.”

“The best thing that ever happened to me was finding that gym and those guys. Being there and becoming part of that team, it saved me. I don’t want to think what I might have become. They showed me the right way and helped me become a real man and a real person.”